Well, I really thought that Maryland was going to get hit pretty bad with this storm, but we dodged the bullet, and I am so glad.  I was worried to be quiet honest, but Alex, on the other hand, was cool like a cucumber.  When I took her out, I think she was just happy to be out and did not seem to have a care in the world.

Aside from taking Alex for short walks, during Winter I do my best to make sure that I always have chicken soup cooked and ready for my girl.  She seems to enjoy it specially when she gets it as part of her morning and evening meal.  Don’t forget to exercise your canine companions, but please bundle up, both you and your furry kid, make the walks short, and be safe.

This was the first year we were not home.  Instead we went to Boston to visit family and did a little sightseeing while there.  As you can see, Alex could care less about the ducks around her. 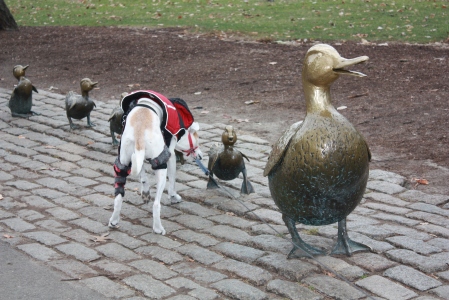 It was funny to see Alex totally uninterested in all the real ducks around her, but once she saw these “fake” ducks she couldn’t help herself and she had to go and meet them.  As you can see, she is meeting them the polite way, the doggie way.  How?  By sniffing the tush.

Alex even posed with them.  She was such a good girl.  By the way, because it was so cold that day, we were out for about 20-30 minutes only.  We parked very close so we went back to the car and headed to get some food.

We could take Alex pretty much anywhere dogs are allowed because she is used to so many things, including horses.  We saw a policeman on a horse, but I was hesitant about asking him for a picture so we kept walking.  When Alex was a puppy I took her everywhere so that as an adult dog she would be comfortable in different situations and areas.  Belated happy new year 2015!